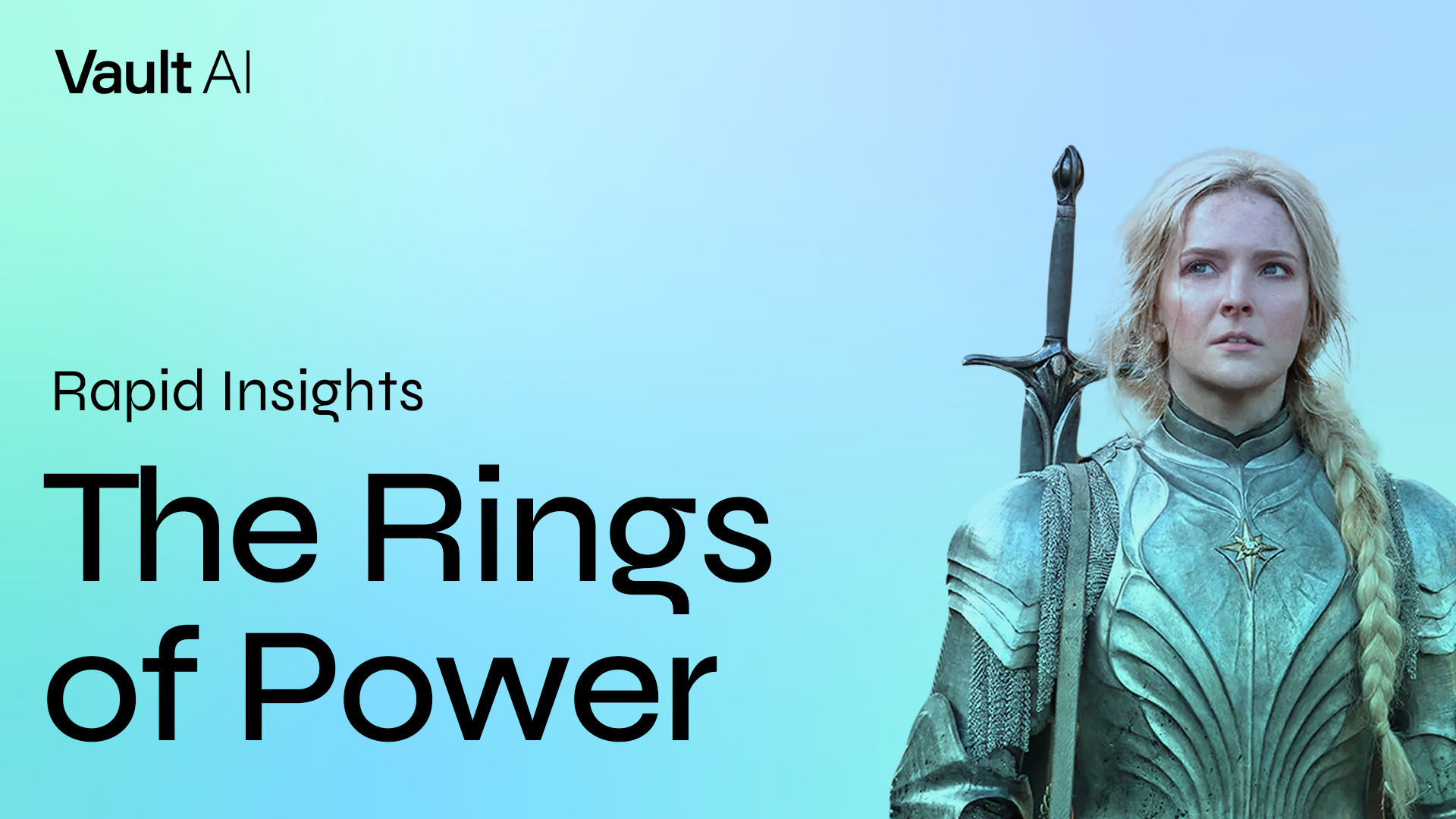 In creating the most expensive show ever made, Amazon has taken a giant swing with their much-anticipated new Lord of the Rings series, and their gamble has already paid off with a slew of positive reviews and Prime Video’s most-watched premiere to date. Derived from the appendices in J.R.R. Tolkien’s original LotR novels, this new show is set thousands of years before the events of The Hobbit and tells the story of the forging of the titular Rings and the rise of the Dark Lord Sauron in Middle Earth. Here’s what you need to know about The Lord of the Rings: The Rings of Power:

Who’s tuning in for this new series?
The same epic fantasy audience that has made similar titles a hit. The Rings of Power viewers skew male (56%) and older (63% aged 30+), a profile very similar to The Witcher, The Sandman, and the SVOD release of House of the Dragon. Interestingly, however, fellow Amazon saga Wheel of Time leans more female.

Have fans been anticipating the show’s release?
Most definitely yes. After big spikes in online activity with the first two trailer drops earlier this summer, social buzz has maxed out our scale (of 160) and remained there ever since the release of the final trailer on Aug 23. So far, The Rings of Power has shown more sustained buzz than the recently-released House of the Dragon, which has slipped a bit since the show’s premiere.

How does the Lord of the Rings connection impact the show?
It gives it its identity. The IP Extension (113) that celebrates Tolkien’s Distinctly Realized World (108) of rings, Elves, and Hobbits both situates the show squarely in the realm of Fantasy (115) and contributes to its bingeability. At the same time, the classic franchise tenets of a Dangerous Mission (118) undertaken by brave but unlikely heroes, the Scary Situations (122) and dangerous obstacles they must overcome, and the epic Battle Action (120) on display during army-wide clashes are major drivers of all aspects of series engagement. Tolkien’s legendary universe is essentially a world all its own, one so uniquely fleshed out and enmeshed in the social consciousness that it can almost be called its own genre.

What makes the Rings of Power story stand out within the franchise?
Its Strong Female Protagonist. The show follows a much-younger version of Galadriel, the beatific, elder stateswoman Elf featured in the Lord of the Rings trilogy (and played by Cate Blanchett in the movies). In this iteration, Galadriel is a brash, headstrong warrior fighting to prove Sauron’s treachery, and it is her character’s long-term journey that will most drive social buzz (130) and ratings (126). The contrast between Galadriel and the timid male Hobbits Bilbo and Frodo particularly helps Rings of Power feel unique from its predecessor films.

What will keep viewers watching into a second season?
A raft of unlikely companions. In addition to Galadriel’s personal journey, Rings of Power follows a number of characters grouped into various mismatched Team-Ups (114)– including two homebound Hobbits and a mysterious stranger, as well as Galadriel and a human fugitive–and explores how they demonstrate Heroism (111) and bravery in the face of adversity. All are key drivers for series longevity.

What will pull in international audiences?
The gorgeous cinematography. Just as the beautiful locations set the LotR films apart, Outdoor Adventure is the top series viewership driver across key international markets; audiences everywhere are intrigued by the stunning, epic-worthy scenery of Middle Earth.