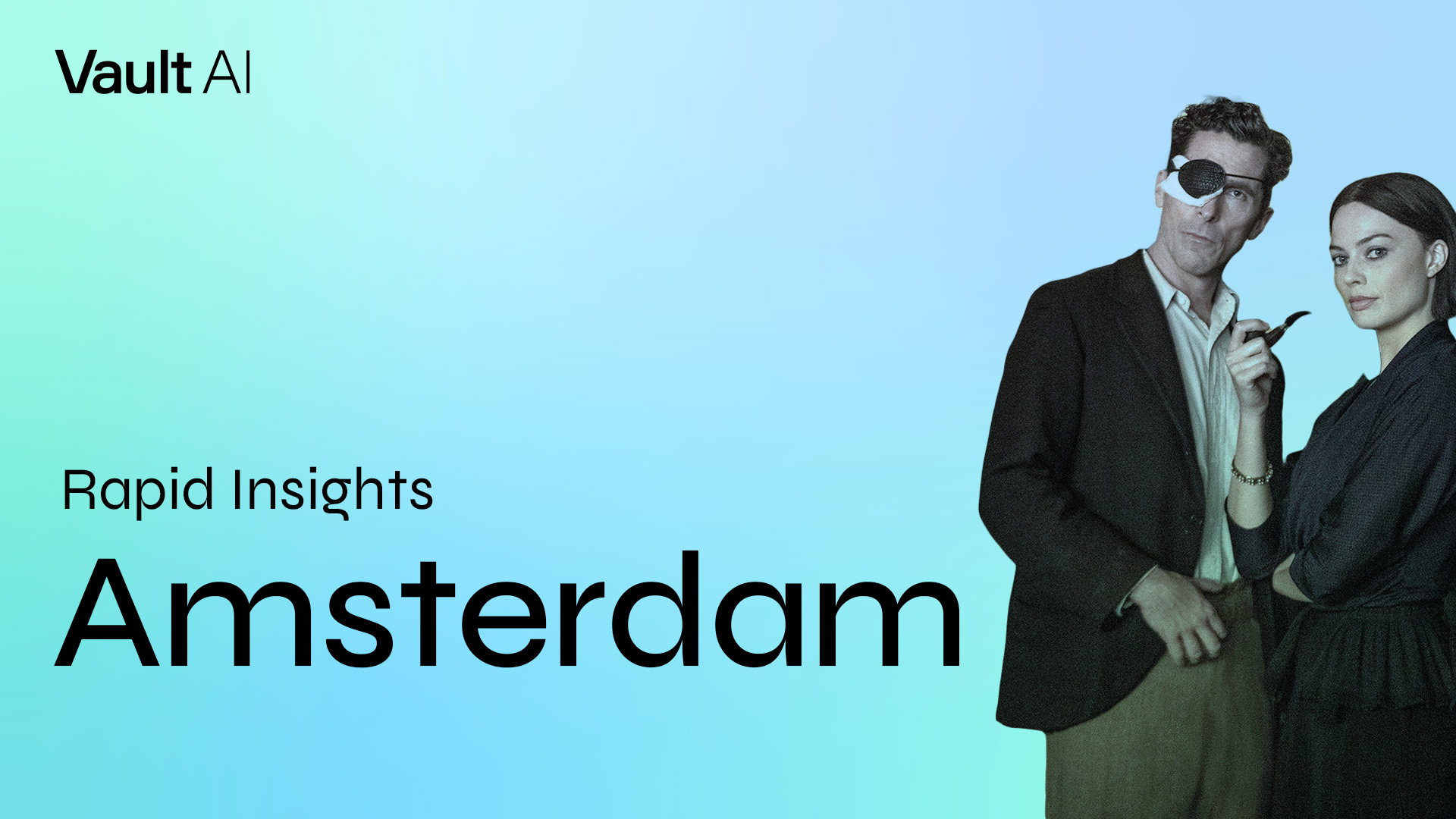 David O. Russell’s intriguing new showpiece premieres in theaters in early October, and it promises to be a doozy: slick 30s noir setting, buzzy narrative, tantalizing mystery, and comical mad-cap shenanigans by some of Hollywood’s biggest stars. The casting roster in particular has piqued viewer and critic interest alike, with even minor roles going to silver screen icons. Here’s what you need to know about Amsterdam:

Who will be the film’s theatrical audience?
Amsterdam will court older viewers (skewing 70% aged 30+) and is expected to be gender-balanced (50% female / 50% male).

What will make Amsterdam a must-see?
The absurdity of its mystery. The film is, in essence, a Buddy Comedy of Errors (160), in which three ridiculously hapless friends witness a murder in the 1930s and unwittingly become suspects themselves. The central whodunnit Murder Mystery (152) that emerges as the three search for the real killer will keep audiences engrossed in the plot; at the same time, the silly, slapstick tone of their investigation juts up against scenes of shocking Action & Violence (123), the combination of which will provide an engaging viewing experience. The balance of these elements is also what will keep the film’s appeal broad; men will come for the action-comedy, while women will watch for its core mystery.

How important is the historical setting for this film?
It’s noteworthy but not crucial for box office. The Period Piece (107) elements of the 1930s-set Amsterdam are not its major draw; while the Depression-era wealth disparities, racial overtones, over-the-top gangsters, and other trappings will contribute heavily to the film’s quirky-noir essence, viewers will be more attracted to its core comedic murder mystery. It’s worth noting, however, that the period aspects will be a strong enticement specifically for women 30+.

How does social buzz currently look for Amsterdam?
Somewhat muted. Thanks in part to Don’t Worry Darling and its Venice Film Festival premiere sucking up most of the movie-gossip oxygen, Amsterdam’s online presence in terms of tweets and YouTube trailer views is a bit behind. However, the existing chatter so far is quite positive, and the film’s much-teased Taylor Swift cameo has become a growing topic of conversation. Amsterdam still has several weeks to go before release, and plenty of opportunity remains for it to make a big splash as its ramping-up campaign leans farther into its core viewership drivers.